Use Dynamic Record Linking when you want to associate (link) pre-existing objects between two systems.

Dynamic record linking allows the users to map existing records (in source and destination applications) for syncing updates without ConnectALL having to create new records on either side.

Steps to configure an automation to use Dynamic Record Linking:

In the Flow Properties section of the "Entity Mapping" tab, you will see the sync operations to choose. If you do not want ConnectALL to create any new records, uncheck the "Create" option for both applications as shown below.

Uncheck the Create sync operation under an application in Entity Mapping to inform ConnectALL to not create any new records in that application.

If the "Create" operation is selected along with the Dynamic linking feature, ConnectALL will create a new record if the linking record ID field is empty or null.

The next step is to choose a record linking strategy. By default, ConnectALL assumes the automation is configured with a regular strategy. Set the Record Linking Strategy to Dynamic.

If the record linking strategy is set to "Regular", you will not be able to save an automation without selecting the "Create" sync operation for at least one application.

Once the automation is created with the Dynamic Record Linking strategy, go to a record you would like to link and add the destination record ID that you would like this record linked to. For example, suppose a Jira bug called "DEMO-88" should be linked with the ALM record "1420." Enter the ALM record ID in the CA_External_Id field which was mapped in the automation as shown above. 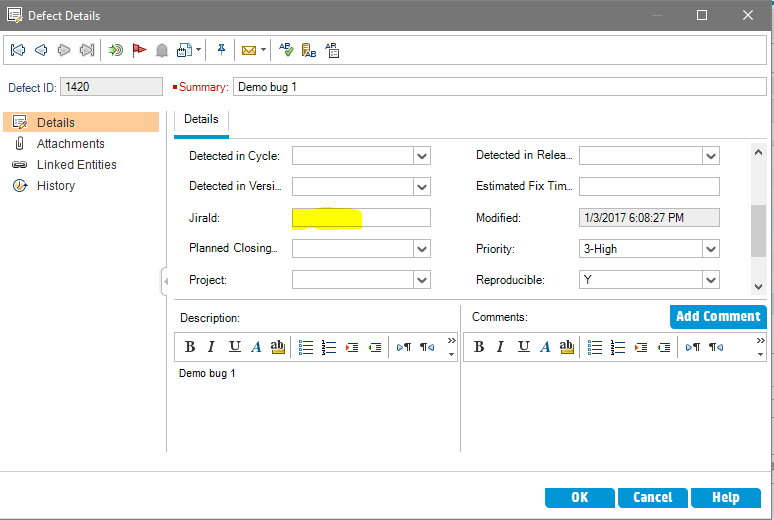 After the sync, ConnectALL will link the DEMO-88 and ALM 1420 records together, and updates to these records will flow through thereafter.  This works for the Universal Adapter as well. Simply provide the other system's record id in the appropriate field in your JSON payload.

If by any chance ConnectALL is not able to save the record link, an email notification is sent out describing the reason of the failure. Based on the sync operation selected (i.e. Create and/or Update), either it will ignore the record or proceed to create a new record.

ConnectALL validates record IDs by retrieving the record from the destination application before linking it. Consider these scenarios: