It was observed in many of the environments when both Forms/Windows authentication is enabled in Project Server then only Forms Authentication can be used with ConnectALL Integrations.

To avoid old records getting resynchronized again, follow the below procedure:

As shown below, ConnectALL expects the Project Collection name along with URL, Username, and Password credentials to connect to Project Server.

In a few ConnectALL deployments we observed that ConnectALL authentication to Project Server fails when ConnectALL services are running with 'Anonymous/Service' user. In this case, please log in as System administrator and change the login user from the "Log On" tab in Service properties for both Tomcat and ConnectALL core services.

ConnectALL allows the user to choose from which project the "Tasks" can be synchronized. 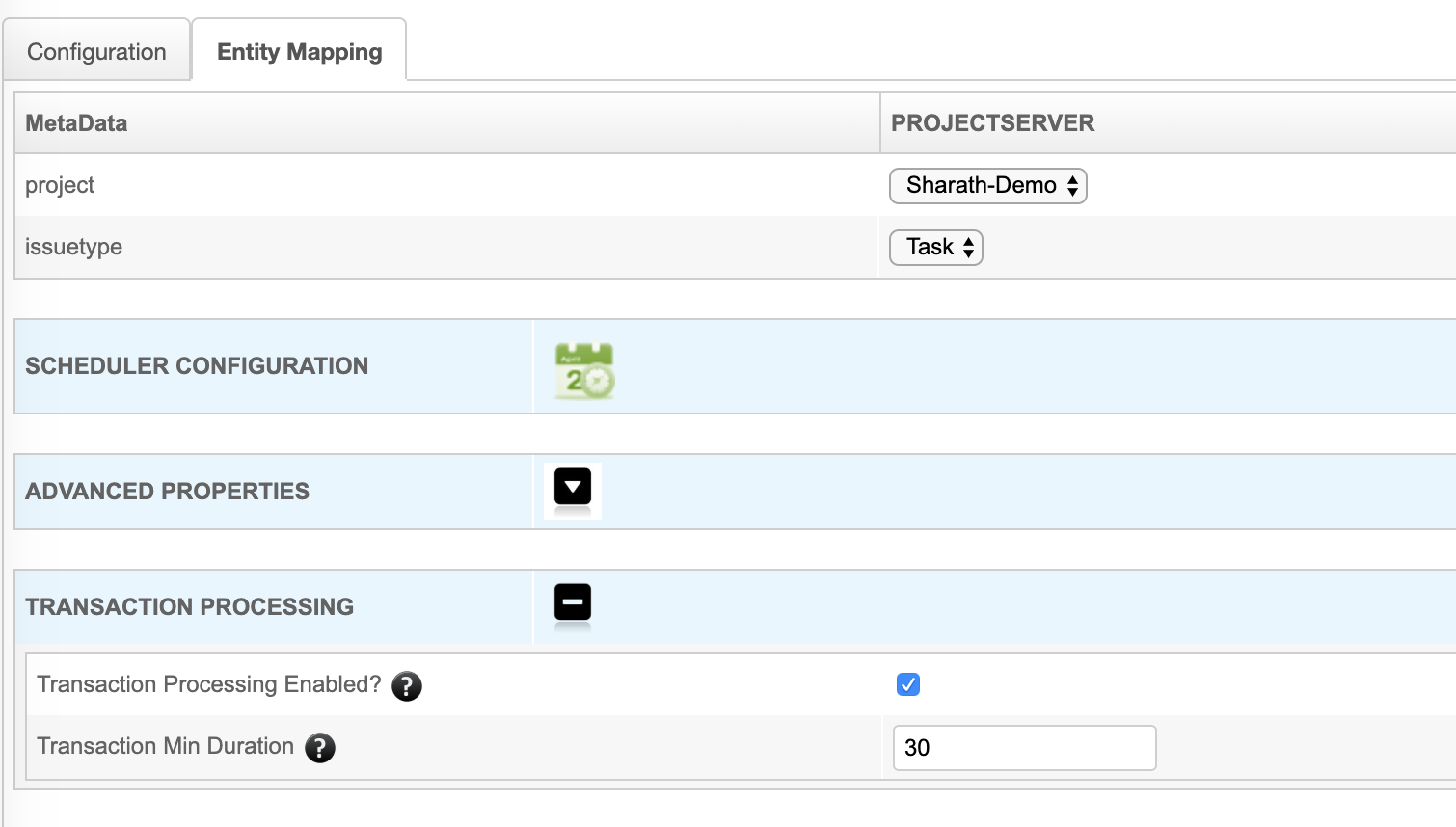 As of version 2.10.30.2, you no longer have to enable 'Transaction Processing' — as it is automatically enabled. Hence, you will not see the option in the UI (in version 2.10.30.2 and later versions).

Consider the above configuration: the Project will be "Checked Out" for a minimum of 30 seconds before "Check-In", and will push the records to Project Server once the elapsed time expires, ConnectALL will confirm no other records are being pushed before completing the "Check-In" operation.

The "Transaction Min Duration" setting will not guarantee the project will be "Checked In" after the specified duration. ConnectALL will wait for all the updates in process to be completed before Checking-In the project.

Microsoft Project updates (commits) data asynchronously after receiving the update request via the API. That delay can cause undesirable effects if an attempt to read the data is made before the commit is complete. Therefore, consider increasing the timeout (in milliseconds) as given below in the ConnectAll.properties file.

This will help ensure that custom fields get appropriately updated and will reduce the likelihood of duplications. Further, increasing the timeout also reduces the possibility of conflicts where old data may be resynchronized again.

ConnectALL runs a couple of batch job to close the open projects that were not "Checked In" during the synchronization and also handle the server restart scenarios; using a couple of properties in $MULE_HOME/conf/ConnectAll.properties

The first batch job will persist the open transaction details into a flat file at the specified duration. This can be configured using "transaction.backup.frequency" property.

The second batch job will close the open transactions that were not closed during the synchronization of the records, the duration can be configured using "transaction.flush.frequency" property.

ConnectALL Microsoft Project Server adapter will read the schemas of the "Task" Enterprise Object along with any Enterprise custom fields and Lookup tables configured for the Task for performing the Field and value mapping.

Documents are attached to Tasks in Microsoft Project Server from the Project Site, Task details page in Related Items. The "Starting from your tasks" section in Link Issues, Risks, Deliverables and Files support page will detail the steps to be followed in linking documents to a Project Server Task.

Microsoft Project Server tasks can be assigned to multiple resources, which is not quite common in other project management applications like Jira where a Task is assigned to a single resource. If the destination application does not support multiple values for the mapped field you might encounter synchronization errors.

The "Assignment" field in the Microsoft Project Server Adapter is a ConnectALL internal field to instruct ConnectALL to synchronize Task assignments.

If you are in version 2.10.13 or above, you can sync both parent and child tasks through a single app-link. For example, you can sync the task and subtask of MSPS to a ServiceNow project task by creating just a single app-link. To do that, create an app-link between a ServiceNow’s task (pm_project_task) and an MSPS task, and map the fields. Once you create the hierarchy of tasks, the same hierarchy will be maintained in the ServiceNow application.